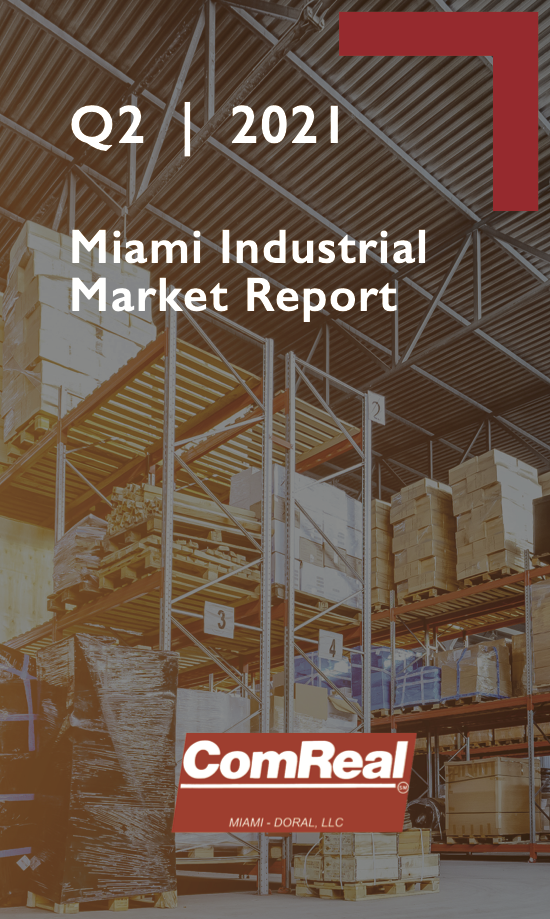 There is over 4.4 million sq. ft. of new construction in the works, and about 4 million sq. ft. was delivered over the past year. This is including the one million SF Home Depot distribution center in Hialeah, which completed construction in early 2021. Most of what is being built is speculative. The largest speculative projects are in the 200,000 SF-300,00 SF range like the two buildings at Gratigny Logistics Center in the North Miami Beach Submarket, which totals 447,000 SF and is due to complete in coming quarters.

Vacancy rates in Miami are around 3.9% and are back below the National Index rate. Though international trade has been impacted by the Government-19 pandemic and shutdown, the e-commerce sector, including Amazon, has been responsible for many of South Florida’s largest lease deals in the past seven months. In April, Amazon leased about 220,000 SF at the newly built Prologis Beacon Lakes Industrial Distribution Center in the Miami Airport West Submarket. The company also leased a 210,000 SF property in the Hialeah Submarket, which it will occupy following extensive renovations. Vacancies could stabilize once the 4.5 million SF under construction delivers and leases. Construction starts have slowed, which along with a rebound in leasing in recent months could keep vacancies stable.

Annual industrial sales volume has bounced back and is now about 25% higher than the metro’s 10-year average. Deals over $20 million have become less frequent during the past year, with only nine deals in that range versus 17 deals in 2019. However, there have been a handful of smaller portfolios like the sale of buildings six and seven at County Line Corporate Park in Hialeah. In June, Chicago-based CenterPoint Properties acquired the two buildings totaling 412,000 SF from Miami-based Flagler Real Estate Services for $61 million. The 12-month sales volume growth is down 20.2%. Market prices are around $175/SF.

Though the region has regained some of its jobs toward the end of the year, as of the Bureau of Labor Statistics’ (BLS) release of April jobs figures, the metro was still down about 100,000 jobs since February 2020. Tourism has been greatly interrupted and the cruise industry with which Miami is intertwined will likely feel the lingering effects for some time. While the shape of the economic recovery from the past year is yet to be seen, in Miami it is likely to be prolonged. The high cost of living is likely to continue driving net negative domestic migration from the city. The good news is that no one industry accounts for more than 15% of Miami’s jobs, helping to insulate the city from higher losses as a proportion of the workforce during downturns.