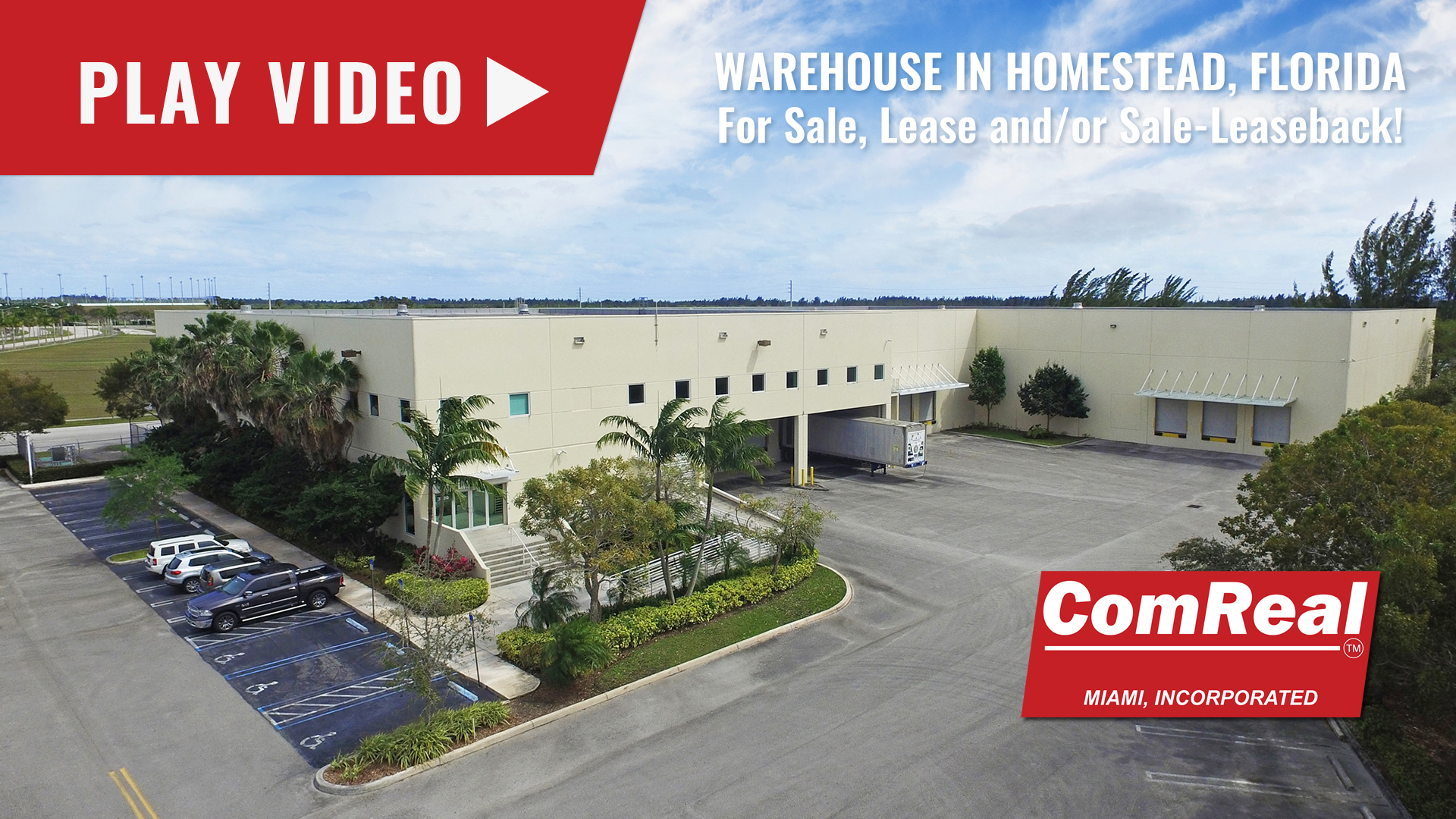 Sold! Edward Redlich, SIOR, CCIM with ComReal announces the sale of 3790 Alex Muxo Boulevard in Homestead, Florida. The 64,019 sq. ft. warehouse is located within the Homestead Park of Commerce. The sales price was $6,050,000 or about $94 per sq. ft. The seller was Anaga International and the buyer is Trading Unlimited.

The property was listed on-the-market for over four years. ComReal was retained to sell or lease the building long term. However, the industrial real estate market in South Dade moves very slow. Shortly after Hurricane Irma in 2017, Redlich learned that the Hilton Hotel in Key Largo would be undergoing renovations. Their logistics provider, Mid-West Moving & Storage, was seeking a warehouse to store the new furniture of a period of six months. Redlich was able to retain Mid-West for a short term lease at the warehouse on behalf of his landlord/client. The deal was a win-win for both parties and provided a temporary fix until a long term solution was procured.

After an extensive marketing campaign via ComReal’s national and global networks, Trading Unlimited was retained to purchase the Homestead warehouse. Over ten jobs will be created. This completed Redlich’s 3rd significant transaction with the Homestead Park of Commerce, more than any other commercial real estate broker. In 2016, Redlich was also responsible for recruiting Dunham Bush Air Conditioning. He sold the 15 acres site that he personally owned to them for $3,100,000. In it’s first phase, Dunham Bush is expected to create over 50 new jobs. Read more about this story at Homestead Park of Commerce Welcomes Dunham Bush. >>>

It is public knowledge at this time, that Redlich is now representing Copart USA, a S&P 500 Company, in their acquisition of 117 acres also within the Homestead Park of Commerce. “In 1995, I entered the commercial real estate industry with my father, Ron. We both lived in the Redland. So it was always special to us to do deals and create jobs in South Dade.” states Redlich. “The challenge with the Homestead Park of Commerce is that most of the park is in poor condition for development, encumbered by Federal Wetland restrictions, located in the restrictive flight path of the United States Air Force Base as well as a very bureaucratic Planned Urban Development zoning within the City of Homestead that doesn’t mirror other industrial parks across the nation. In addition, Homestead’s geographical location being on the end of a peninsula surrounded by water and swamp makes the marketability of industrial properties incredibly difficult. We are at the end of the logistical supply chain”.

Redlich is a native to South Dade and proud of the fact the he was “Redland raised”. He volunteered with The Homestead Vision Council for over a decade and had the honor of serving as the Chairman of the Board from 2006-08. Presently he is a Trustee with the South Dade Chamber of Commerce. For over 25 years, Redlich as worked in the commercial real estate profession in South Florida. Throughout his career, he has sold hundreds of acres of land and assisted clients in creating hundreds of jobs in the South Dade community. His passion and focus has always been South Dade.

Background of the Homestead Park of Commerce (HPC). In 1999, the City of Homestead, owner of HPC, entered into an agreement with the Rockefeller Group out of New York City to extensively market the Homestead Park of Commerce. After zero success, Rockefeller was terminated and the City sold the park to A&H Commerce. This group went bankrupt and the park was then acquired by GBX Homestead who also subsequently went bankrupt in their efforts to develop the park.