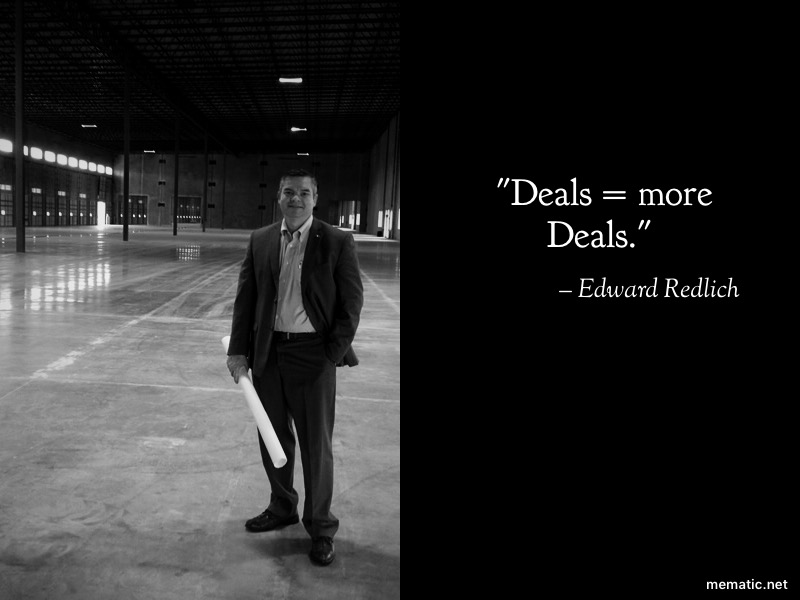 This photo was taken in a new empty warehouse in South Florida Logistics Center. Redlich’s team has repped six (6) clients here totaling over 350,000 sq. ft.; more than any other brokerage firm.

So how exactly does doing deals equal to doing more deals? You’ve probably heard of the saying “90% of your business comes from 10% of your customers”. The concept of “deals = more deals” is similar, but it goes much deeper than this.

Our team finds that upon successfully completing a deal we have always learned more. The experience we have earned during the transactions then better assists us on future transactions. We may learn how to restructure a deal or how to handle a certain personality type just as a couple of examples. In other words, every deal makes us better prepared for the next one and serving our client’s needs.

Another way that “deals = more deals” is that we often form relationships with the parties involved. And it is not just the tenant and landlord, or buyer and seller; but, it is also the attorneys, the lenders and all of the other service providers that we meet along the way. These relationships then lead to more opportunities in the future because we have built trust and confidence with each other. We both know with certainty that we can each do our jobs professionally then get deals closed.

Here is an example of a series of deals that prove my concept that deals do indeed lead to more deals. In 2004, my father and I sold the 25,000 sq. ft. building located at 9590 NW 25th Street in Doral for $2,050,000. An appraiser called me afterward to get a better understanding of the transaction and ask me more questions about the market in general. At the end of the call I asked her what other property she was working on. She stated that she was doing an evaluation for the State Farm Insurance building located nearby at 8825 NW 21st Terrace because they were about to put the property on-the-market to sell. So I immediately contacted State Farm directly and sure enough they were ready to sell. Our team swiftly brought over one of our customers, United Data Technologies (UDT), who we had also sold some land on 25th Street to a couple of years prior. They quickly placed it under contract then closed in June 2005 for $2,300,000 before it even was ever placed on-the-market. It was a win-win for both parties.

The neighbor who was in the aviation industry at 8875 NW 23rd Street was so impressed with our performance that they called me to sell their property. In December 2006, we sold their property for $2,300,000. We did right by our client and years later in 2014 they contacted us again to represent them in their lease acquisition. After preparing a comprehensive market study we then leased them a 37,500 sq. ft. warehouse space in the Miramar Park of Commerce; the lease value was appx. $2,000,000.

This is just one series of deals that totaled over $10,000,000. The one original deal of $2,000,000 lead to over $10,000,000 worth of deals… and counting. Every deal is a learning opportunity that will increase your deal-making success rate in the future. However, the more important moral of the story to this is that if you treat your clients right, they will keep returning and doing more deals with you. Hopefully, they will introduce you to their friends as well.