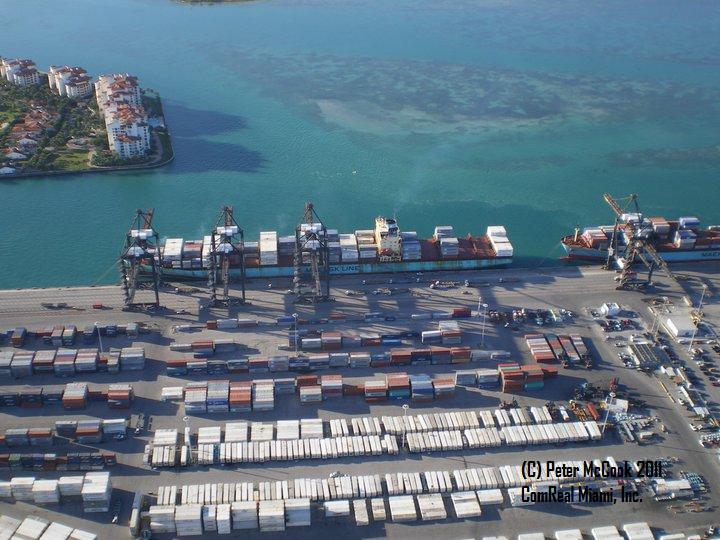 The deep dredge of the Port of Miami channel now has the support of the State of Florida thanks to Governor Rick Scott. The State of Florida must now approve the $77,000,000 of additional funding. Perhaps a small price to pay when you consider that Miami’s import-export trade industry was over $3 trillion in 2010. Bill Johnson, Port of Miami Director, firmly believes dredging to a depth of 50′ deep will increase the competitiveness of the USA’s southernmost port. Although some believe that Jacksonville and Savannah would make more sense logistically due to their location along the east coast. However, Miami is the gateway for international trade between the eastern and western hemispheres. Miami dominates the international trade routes and relationships, so it does make sense from this perspective. For the official press release on Governor Rick Scott and Port of Miami’s deep dredge just << click here >> to read further.

There is no doubt that the expansion of the Panama Canal and the Port of Miami will impact the Miami industrial real estate market. More trade means more cargo which occupies larger warehouse spaces. The vacancy is now 9% and you may expect this to fall steadily as we reach 2014; the year the construction in Panama is completed. We might also hear announcements from local industrial warehouse developers about new projects. Not only will the demand for Miami warehouse spaces increase. The demand for office space should increase from those that service the international trade industry, plus retail space may be needed for all of those international shoppers and visitors. To read more about the Port of Miami and the following projects: Port of Miami tunnel, FEC rail and deep dredge, please <<click here>>.

On Friday, February 18th, brokers from the Miami industrial warehouse team attended the Panama Canal Expansion event presented by World City and RCA Miami. This comprehensive event included speakers from the Port of Miami, POMTOC, Miami-Dade County, Florida East Coast (FEC) Railway and the Panama Canal. The event was sponsored by Miami International Airport, Miami-Dade County, Seaboard Marine, Port of Miami, American Airlines Cargo and SeaFreight Agencies. About 200 people attended the event. If you would be interested in any of the presentations, please contact us and let us know. We would be happy to forward to you.

Several takeaways for myself included the comment about the USA’s Jones Act from Mr. Rodolfo Sabonge of the Panama Canal Authority. He stated that has an effect on the USA’s maritime economy. Since I was not familiar with what the Jones Act (aka the Merchant Marine Act), I looked it up on Wikipedia. see <<Jones Act>>. With the 100th anniversary coming up in 2014 and the completion of the expansion of the Panama Canal, it is very timely to visit Panama and take into consideration the business opportunities. Miami-Dade County will be conducting a business development mission to Panama in June of 2011. Another thing  that I took away from this event is that even if Miami did not get the deep dredge, our port would still prosper. Instead of getting the larger containerized ships, Miami might become more specialized. For example, the Port of Miami may become more diversified by receiving more cargo headed for South & Central America; refrigerated and freezers containers; smaller ships; non-containerized cargo such as buildings supplies, heavy equipment, automobiles, etc.; and have higher traffic with quicker unload times. From Panama, Miami is the closest city on the eastern coast of the USA; so this would likely remain a competitive advantage in either case.

For an aerial photo and map of the Port of Miami from Google just <<click here>>.